An Oddity, The World’s Largest Corvair 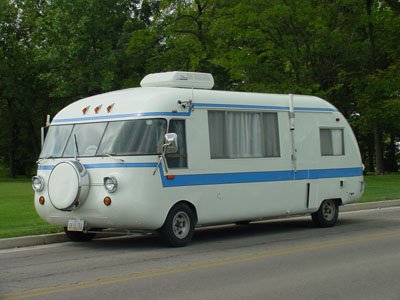 The professionals at Trotter’s RV are northwest Arizona’s one stop shop for RV sales and service. Still, one can’t help but wonder what they would do if someone arrived with an Ultra Van and requested service. After all the innovative recreational vehicle was a relative rarity when new. And now more than five decades have passed since they were manufactured.

David Peterson was an aircraft designer by trade. And so it should come as no surprise to learn that when he decided to design a recreational vehicle it would use a monocoque composite structure. For those unfamiliar with the concept, Monocoque is a structural system in which loads are supported by an object’s external skin, similar to an egg shell. Peterson designed the Ultra Van with an aluminum center and rounded reinforced fiberglass end caps.

Traditionally motorhomes are built on a bare conventional commercial truck frame and chassis as the the foundation. Peterson envisioned a recreational vehicle, the Ultra Van, of the future. It would be lightweight and spacious. It would be fuel efficient and easy to repair. It would be a fully self contained home on wheels.

On paper Peterson began tinkering with the idea in the late 1950s. Counted among the many obstacles to overcome was the drive train. There was noting available that fulfilled his vision. Then in 1959 the Chevrolet division of General Motors introduced the Corvair. Shortly afterwards the innovative ramp side pickup truck was added to the expansive line of Corvair models. It was exactly what he needed.

And so he began work on a prototype in California as a student apprentice program. With a Corvair flat six engine and transaxle chassis as the platform, Peterson created a streamlined fully self contained coach. The finished Ultra Van was an engineering marvel that weighed a mere 3,000 pounds fully equipped. This was about 500 pounds less than a 1962 Chevrolet Impala sedan!

During extensive testing Peterson determined that the Corvair powered Ultra Vans could cruise comfortably at 60 miles per hour. He also felt comfortable advertising an average of fifteen miles per gallon. Another selling point was the independent suspension that provided a comfortable car like ride on passenger-car tires.

After completion of the prototype, Peterson initiated a series of refinements and improvements on subsequent models. Then in 1966, after producing fifteen Ultra Vans he decided to commence actual production. After an extensive search for a suitable location he settled on a WWII era military aircraft hangar and repair facility in Hutchinson, Kansas.

By the end of the year eight units a month were rolling out of an airplane hangar by 1966. Production continued until 1970. According to records 370 Ultra Vans were built. A study conducted by Corvair enthusiasts in 2010 found 200 of these unique RV’s were still on the road.

Discontinuance of the Corvair, not a lack of sales or interest, brought the project to an end. However, it did not end Peterson’s interest in creating a recreational vehicle for the future. He produced forty Ultra vans fitted with small-block Chevrolet V-8 engines and rear ends sourced from Corvettes. Then he produced two prototypes. One used a slightly modified Cadillac El Dorado V8 engine and transaxle at the rear of the Ultra Van. The other used a similar drive train borrowed from an Oldsmobile Toronado.

If you find yourself in the market for a recreational vehicle, and want something unique, keep your eyes open for the rare Ultra van. And if you do one, it might be fun to try and stump the professionals at Trotter’s RV.