Living The Life of A Luxurious Gypsy 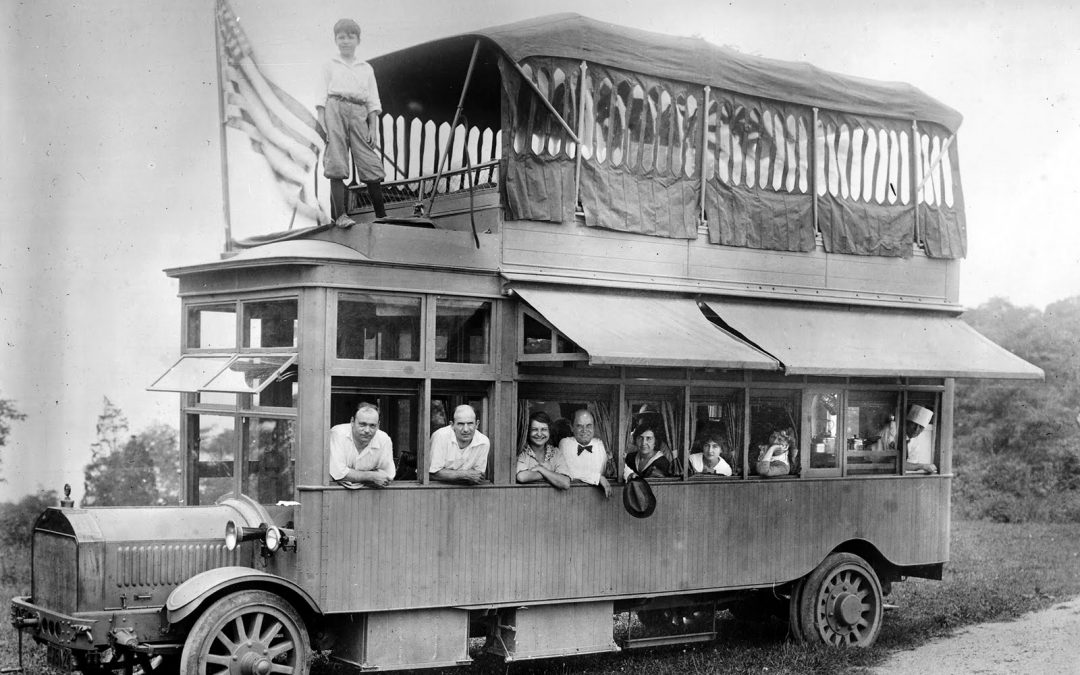 In business for more than thirty-fiver years Trotter’s RV Sales and Service has sold or repaired a wide array of coaches and trailers. Some were palaces on wheels. None, however, could compare to the Gypsy Van built by the Gas-Electric Motor Bus Company for Roland Conklin in 1915. Adding to the myth of the now legendary Gypsy Van is it’s epic maiden voyage that included, according to the New York Times, “Mr. Conklin, Mrs. Conklin, Roland, their son; Miss Julia, their daughter; a young woman friend of Miss Julia; two of Mr. Conklin’s nephews, a cook, a chauffeur, and a mechanician.”

The Conklin family fortune was launched by Stanley L. Conklin in 1874, when he relocated to Columbus, Kansas with his new bride, Anna Martha Adams. He was banker that proved adept at real estate investment and speculation in mining, stocks and transportation companies. In 1887, Stanley partnered with his brother James and established a real estate and securities brokerage firm. By the dawning of the 20th century the firm was one of the largest in the United States, and the families were counted among the most wealthy in hte country.

On May 2, 1901 the brothers established the American Motor Coach Company inn Chicago, Illinois. Cook County, Illinois with a capital stock of $100,000. The December 15, 1902 Automobile Review carried a feature about the company and its first scheduled service: “Motor Coaches Compete with Chicago’s Carettes. An important event to the automobile industry was the inauguration, December 10, of a new line of motor coaches running between Adams street and Lincoln park, Chicago. It was started by the American Motor Coach Company. The coaches are gasoline machines built to accommodate twenty persons. Seven vehicles were put in commission to run seven minutes apart.” The service expanded exponentially in the years that followed.”

By 1912, the company was also manufacturing busses with gasoline or electric power, and had acquired control of the principle railroad in Cuba. It was one of the largest and most diverse companies in the world. And so when Ronald Conklin decided to embark on a 5,000 mile, three month family transcontinental holiday of epic proportions no one was surprised to learn that he had commissioned construction of a custom coach for the trip. What the press was started by was the level of luxury.

A feature published in the New York Times, August 21, 1915, provides a snap shot of the amazing Gypsy Van. “GYPSYING DE LUXE ACROSS CONTINENT; Party of Ten to Travel, Dine, and Sleep in the Big Motor Van of Roland R. Conklin. LIKE A HOUSE ON WHEELS. Has Shower Bath, Stove, Cupboards, Ice Chest, and Closets Enough to Satisfy Most Women.”

“The first impressive thing about the vehicle, which Mr. Conklin calls his ‘land yacht,’ is its size. Over all it is twenty-five feet in length, six inches longer than the Fifth Avenue buses. It is seven and a half feet wide and thirteen feet high. It weights between seven and eight tons. Mr. Conklin’s van is made for the accommodation of passengers both inside and on its upper deck. Inside there are comfortable sleeping bunks for eight persons, and there are also sleeping quarters on the upper deck, which may be covered with a removable roof, and a roof garden for vegetables. Meals for the party will be cooked in a galley in the van fitted with an electric stove as the van also carries a generator. Also there is a shower bath in the car, to which hot water is supplied from the radiator and cold water from tanks, and electric lights throughout. Food supplies sufficient to last eight persons a week may be carried in the van in cupboards, and an ice chest that has a capacity for 150 pounds of ice in addition to storage room for perishable goods.”

Today you can enjoy the RV life even without having the wealth of the Conklin’s. Still whether you choose to rough it or rough it in style, Trotters RV sales & Service in Kingman, Arizona is here to meet all of your needs.