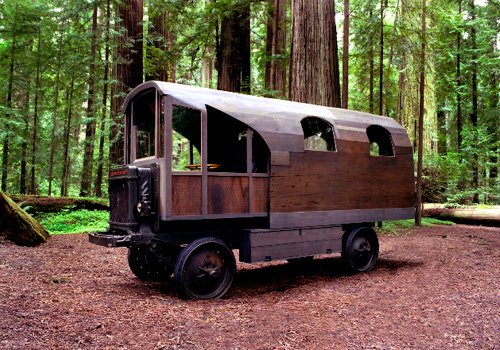 The one of a kind Travel Log was built in 1917. Still, it may not be the oldest recreational vehicle built in America. However, there is little doubt that it is probably the most unique RV ever built. And when it comes to obscure history or a fascinating back story, this vehicle is in a class of its own.

Charles Kellogg was born in Susanville, California on September 5, 1949, the year of the great California gold rush. His mother died while he was sill a child but aside from this his childhood was typical of the times. From an early age Kellogg derived tremendous pleasure in wandering the California hills and mountains, watching the animals of the birds and animals of the forest, and imitating bird songs.

Imitating bird songs wasn’t all that unusual and in the closing years of the 19th century it was even a popular form of entertainment. But Kellogg’s renditions were unique as he had the ability to sing from the throat instead of whistle the songs. That was what made him popular. That was the foundation for his popular vaudeville tours in the United States, and later in Europe. In 1911 Victor Records signed Kellogg to his first recording contract and for the next fifteen years his bird songs as well as other classic tunes and ballads were recorded.

Aside from singing, Kellogg was also an inventor, carpenter and gifted woodworker. He was also a pioneering naturalist that counted John Muir, founder of the Sierra Club, and Teddy Roosevelt among his friend. In 1917 to call attention to America’s vanishing forest and shine the spotlight on the unique redwood forests, he embarked on a projected that blended all of his skills.

First he selected a 16,000 lb. redwood log that was donated by the Pacific Lumber Company. He then used a one man saw to cut a 22-foot section from the 11-foot diameter tree. Next he hand carved the interior of the log into a rustic home that featured a small functional kitchen, a bathroom with toilet, twelve storage lockers of various size, a bed room and guest room, dining room with table and one piece bookcases. When completed the structure was estimated to weigh in excess of 3,000 pounds.

As he planned to use the log home for a nationwide speaking and singing tour, options for a vehicle strong enough to carry the massive Travel Log were limited. He settled on a Nash Quad, a stout 4 x 4 truck that was the WWI equivalent of the WWII deuce and a half. Kellogg conceived an innovative weigh to mount the body on the truck chassis: he dug a tunnel under the wood and drove the Nash Quad under it.

Kellogg toured the country until 1926 with the Travel Log at cruising speeds of 15 and 20 miles per hour. He visited New York and Philadelphia, San Francisco and Kenosha in Wisconsin as points in between. With the close of his tour, Kellogg carved a log into a cabin dubbed the Mushroom. The Travel Log was removed from the truck, and mounted on a foundation. It served as a sewing room for his two sisters. In 1994 it was donated to the Humboldt Redwood Interpretive Association and then mounted on a restored Nash Quad truck chassis. Today Kellogg’s amazing travel log provides travelers that stop at the Humboldt Redwoods State Park Visitor Center with a surprise, a tangible link to the dawning of the environmental movement.

Trotters RV may not be able to provide you with something as unique as the Travel Log. They can, however, meet all of your RV needs.