The Lure of The Open Road 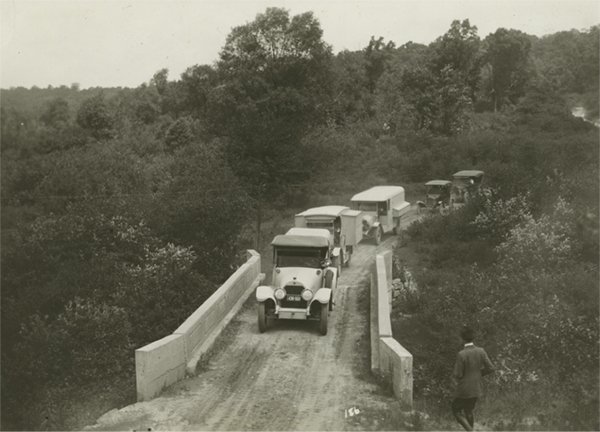 Henry Ford, Harvey Firestone, John Burroughs, and Thomas Edison were proponents of roughing it with a few of the comforts of home. Between 1915 and 1924 the group that had become known as the Four Vagabonds enjoyed a series of summer camping trips that gave the men a chance to discuss scientific and technological developments, to share progress on projects and to energize the spirit. Ford was convinced that getting back to nature was crucial to maintaining good health. The industrialists adventures commenced in 1914 when Ford and Burroughs visited Edison at his home in Florida and the trio toured the Everglades. The idea of regular summer camping trips blossomed the next year when Ford, his son Edsel, Edison and Firestone were in California for the Panama-Pacific Exposition. Edsel had driven from Michigan to the event via the National Old Trails Road through the desert southwest, an epic adventure that included mechanical breakdowns, roadside auto repairs, oppressive heat, washed our roads and traversing quagmires.

Ford, Edison and Firestone paid a visited to Luther Burbank and then drove from along the coast from Riverside to San Diego. In 1916, Edison invited Ford, Burroughs and Harvey Firestone to tour with him through the Adirondacks and Green Mountains of New England. In 1918, Ford, Edison, Firestone, his son Harvey, Burroughs, and Robert DeLoach, founder of the Armour Company, explored the back country of Virginia, West Virginia, North Carolina and Tennessee. There were trips to the Catskill Mountains, to northern Michigan to Massachusetts, and to Vermont where the men paid a visit to President Coolidge. As money was not a concern the trips were well organized and equipped with the latest gadgets. Interestingly enough the men also preferred a bit of roughing it with activities such as cutting their own wood with an ax.

The trips morphed into convoys of heavy passenger cars and customized camper vans to carry the travelers as well as staff and Ford Motor Company photographers. As an example, the vagabonds trip of 1919 included fifty vehicles, including two heavy trucks custom designed and built by Ford. One of these included a full kitchen with a gasoline stove and icebox manned by a chef. There was a large customized touring car that had been mounted on a truck chassis. Compartments were added for tents, cots, chairs, and even electric lights. A folding round table seated twenty people.

The vagabonds were but one manifestation of a growing trend, the camping automobilist. Even during the Great Depression trailers and home built recreational vehicle ownership grew steadily. The prosperity of the post WWII era fueled growth of a new industry, trailer manufacturers that began manufacturing motorized versions. Factory produced campers for pickup trucks dawned in the 1950s, and soared in popularity in the years that followed. Attesting to the popularity of trailers, of roadside camping was release of The Long, Long Trailer starring Desi Arnez and Lucille Ball in 1953.

Trailers, as with the trucks that tow them, and recreational vehicles have changed a lot since Desi and Lucy took to the road, or the vagabonds were exploring the back roads. Fortunately the professionals at Trotter’s RV Sales and Service have kept pace with changing times, and are ready to make repairs or answer your questions. And if you would like to take to the back roads like Henry, Harvey, Thomas and Edsel, they are there to serve you as well.