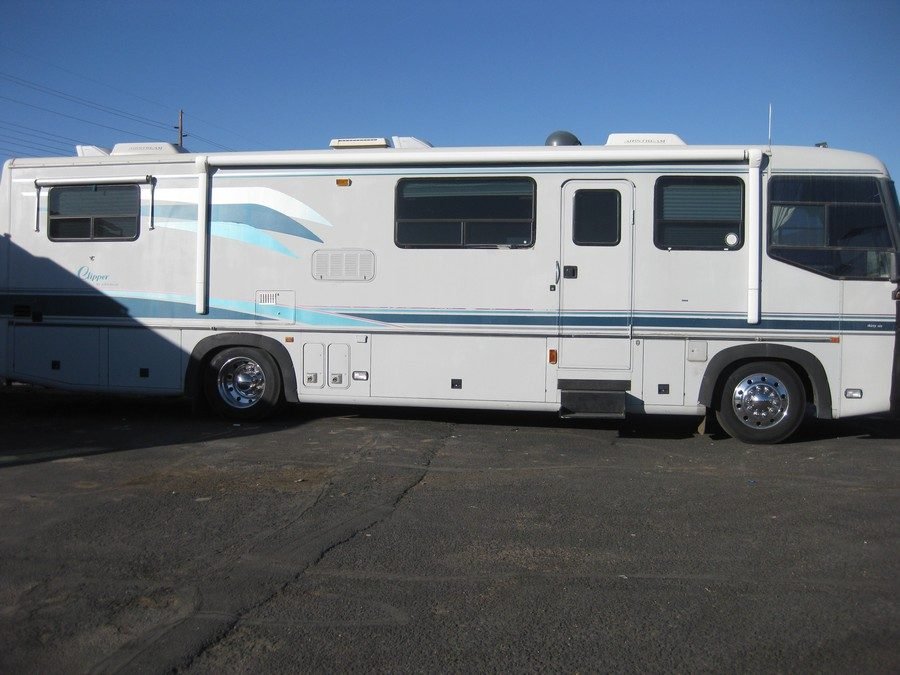 His name was Royal Rounds and he was a dreamer. For him the recreational vehicle was not merely something to be used for the vacation road trip. It was to be a motorized home, a practical solution to the growing post war construction boom and the housing shortage at work sites.

Before Rounds decided to build his version of the future on wheels he was a sergeant in the US Army in the trenches at the front line. It was there in the fall of 1918 that he was neatly killed. His injuries were so severe that on arrival at the field hospital, doctors thought that he was dead. Over the course of two years he recovered but suffered limited use of his left arm and mobility resultant of the bullet shattered hip.

Incredibly he learned to fly, acquired and modified a war surplus airplane and flew a rural mail route in Idaho and Montana. And he survived a plane crash. Then he turned to experiments with radios that resulted in the patenting of vacuum tube.

During WWII, after applying repeatedly and soliciting an old friend that was now a congressman, Rounds was hired by a civilian transport company and trained to fly a variety of heavy bombers including the B-17. He then flew transport planes over “the Hump”, the Himalayas from Burma, where he acquired a rare blood infection, into China.

It was after a long hospitalization that he had the idea about building a motorized home. And so he rented a workshop near the Long Beach, California shipyards and began buying a variety of war surplus; a Dodge deuce and a half military transport truck, salvaged aircraft aluminum panels and ribbing as well as windows, a crated Ford V8 engine and other components. In spite of having only a 7th grade education, he set about laying out complicated drawings for the body, for the chassis and for the drive train.

It took Rounds two years to complete his motorized home. It was an innovative engineering masterpiece. It was futuristic. It was under powered and as Rounds learned on the maiden voyage from California, over Donner Pass and on to North Dakota, completely impractical.

It was nearly 40-feet long and weighed more than four tons, without fuel or water. The fuel tank, water tank and waste water tanks were rubber fuel cells from salvaged. It had radiant heating and air conditioning. It had Plexiglas windows and cork insulation between the aircraft aluminum skin and the real wood paneling. Through a Rube Goldberg arrangement that used cables, pulleys and piano hinges the cockpit could be converted to a library and office when parked.

The front differential from the four-wheel drive Dodge was used to make the contraption a front-wheel drive vehicle. It had air brakes and power steering. And it was powered by a 90-horsepower engine.

Rounds burned the motor out on the trip to his teaching job in North Dakota. He lived in it for several years, repaired it, and headed for Arizona, a trip that burned up another engine.

Rounds died shortly after moving south. For more than three decades Rounds vision of the future languished under the desert sun in Chloride, Arizona. For a few years it was rented as an apartment. Then it was used for storage and as a chicken coop. After the owner of the property died in a car accident, his family sold the vehicle for scrap, and Rounds motorized home became less than an historic footnote.

Recreational vehicles have come a long ways since Rounds transformed his dream into a reality. Fortunately if you have dreams of taking to the open road and taking your home with you, it isn’t necessary to build a vehicle. And if you own a recreational vehicle, you don’t need to perform the maintenance yourself. You just need to make one call to Trotter’s RV.